A worm’s view on immunity 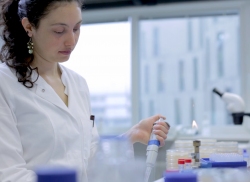 All higher organisms have an immune system that constitutes a biological defense mechanism to protect the body from pathogens and foreign substances. It consists of a complex network of different organs, cell types and molecules that recognizes and fights harmful substances and pathogenic microorganisms. Invertebrates rely exclusively on the innate immune system, which protects the integrity of the organism from pathogen attacks through various barriers and other defense mechanisms. The innate immune system emerged early in the history of life and its defense reactions are generally considered unspecific. Later in evolution, vertebrates evolved a more complex and adaptable system in addition to the innate immune system, the adaptive immune system. It is also called the acquired immune system and is capable of highly specific responses to different antigens and immunological memory and is therefore considered extremely specific.

Using the nematode Caenorhabditis elegans as an example, a research team from the Evolutionary Ecology and Genetics Group at Kiel University headed by Professor Hinrich Schulenburg has now gained new insights into the mode of action and regulatory mechanisms of the innate immune system. Based on infection experiments with two strains of the bacterial pathogen Bacillus thuringiensis, the scientists from the Kiel Evolution Center (KEC) found indications that the innate immune system can trigger different and thus specific reactions to an infection with different but closely related strains of a pathogen species. Yesterday they published their new results in the journal PLOS Pathogens.

It was already known that the worm's immune system responds to different bacteria, especially those that are pathogenic, in different ways, with a specific and only partially overlapping response. In C. elegans as well as in other organisms, immune responses can be studied by interpreting the genetic signatures of transcription. Researchers investigate which genes are activated at which time in order to produce proteins based upon these templates. To understand how the worm responds to two very similar strains of a pathogen species, the Kiel research team thus studied the associated transcription processes. "We initially discovered that the immune response is highly similar towards the two strains of the same pathogen species. However, around ten percent of the immune response genes are regulated differently depending on the bacterial strain. This stronly indicates that the worm is able to fine-tune its immune reaction and generate a specific response to two strains of the same pathogen species," says first author Dr Alejandra Zárate-Potes, former doctoral student in the Schulenburg research group and supported by the International Max-Planck Research School (IMPRS) for Evolutionary Biology. "We were able to identify a specific, so-called 'GATA' transcription factor as a central regulatory element. When this factor is switched off experimentally, the worms reacted very differently to the two bacterial strains," explains senior author Dr Katja Dierking, scientist in the Evolutionary Ecology and Genetics group.

The experimental deactivation of the GATA transcription factor allows the immune system to initiate two very different defence strategies: "By deactivating this factor, the worm becomes tolerant to one strain of bacteria but resistant to the other," explains Dierking, whose work was supported by project funding from the German Science Foundation (DFG) and the Cluster of Excellence "Precision Medicine in Chronic Inflammation" (PMI). "The simple innate immune system is thus able to react specifically to closely related bacteria. In one case, it responds by tolerating a certain load of pathogens. In the other case, it goes on to eliminate the pathogen," Dierking continues. The Kiel researchers deduced from this that the GATA transcription factor acts as a central switch that regulates the immune response to closely related pathogens in C. elegans.

The now published research thus provides new insights into the regulation and functioning of the innate immune system using the the nematode as model. These findings may suggest that also the human innate immune system can react more specifically than previously known. In addition, they highlight the different strategies that the immune system uses to counteract bacterial infections: On the one hand, the mechanisms of resistance against pathogens - i.e. the ability of the immune system to successfully fight a pathogen - are well researched in immunology and therapies based on them are part of everyday medical practice. On the other hand, the mechanisms, which lead to an organism's tolerance - i.e. towards a permanently existing bacterial load that does not affect host fitness - are much less well understood. "One goal of future research will be to examine the molecular mechanisms of tolerance against pathogens more precisely", emphasizes Professor Hinrich Schulenburg, KEC spokesman and head of the research group Evolutionary Ecology and Genetics at Kiel University. "A better understanding of the adaptation of an organism to living and surviving together with a pathogen could thereby also open up new perspectives in the treatment of infectious diseases", Schulenburg continues.