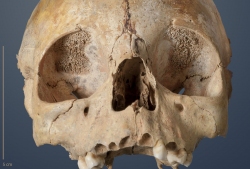 Our cultural and genetic diversity, as well as the functions and significance of our immune system, are a constant subject of current public and scientific discourse. Scientists of the Collaborative Research Centre (CRC) 1266 at Kiel University (CAU) are also dealing with the important question of who we Central Europeans are and where we come from. They recently published new discoveries from their research in the renowned journal Communications Biology; looking at one of the most important epochs of humankind, the Neolithic Period (5500-2200 BC), which is characterised at the beginning by the transition from a hunting and gathering way of life to sedentism, crop cultivation, and animal husbandry.

The focus of the interdisciplinary study is on palaeogenetics, but experts from anthropology and archaeology were also involved. "Researching demographic processes, as well as health and disease, requires the cooperation of different disciplines", explains Prof. Dr. Ben Krause-Kyora, head of the study at the Institute of Clinical Molecular Biology (IKMB). He continues, "Only in this way it is possible for us to understand and reconstruct the different dimensions of the living conditions of the people at that time". A central role within the study, and the research of the CRC 1266, is played by the archaeological site of Niedertiefenbach (Hesse), where a gallery grave from the Neolithic Period was recorded. "Niedertiefenbach is a collective grave in which more than 150 people found their final resting place around 3200 BC", explains Dr. Christoph Rinne, archaeologist in the CRC 1266.

Genetic investigations on the skeletal remains of 42 people from the collective grave led to surprising results. They provide insights into the significance of demographic processes in the Neolithic period and serve to answer the question: To what extent was the genetic heritage of the early hunter-gatherer societies of Western Europe and the first farmers of South-Eastern Europe transmitted to the later populations of Central Europe? The group buried in the Niedertiefenbach grave is characterised by a high genetic diversity, which is based on the mixing of genomic components of the hunter-gatherers and the farmers. The respective proportion of these two components was individually very different. "In addition, we were surprised to find that the genetic heritage of the earlier hunter-gatherer populations was greater than we expected. These people had probably been securing their livelihoods as farmers for centuries, and so far we have not been able to detect this component in the Central European farmers of the preceding 2000 years", explains Krause-Kyora.

Another exciting result of the genetic analyses is that this mixing began around 3700 BC. This coincides with the emergence of the so-called Wartberg society. Characteristic of this society is the construction of gallery graves with collective burial, such as the one in Niedertiefenbach. This speaks for a high integration ability of these human societies, which were in a renewed phase of economic and technological innovation at this time.

And another result surprised the experts: The people laid down in the collective grave were, for the most part, not from nuclear families, but probably from various surrounding settlements or farmsteads. While collective graves – be it the Nordic megalithic graves or the Hessian-Westphalian gallery graves – have so far mostly been regarded as burials of families or close kin, this study is an indication that rather than close kinship, social and ritual affiliation were decisive for the formation of such burial communities at that time.

The genetic heritage of our immune system

One aspect of the study was investigating the immune system of these Neolithic people. Numerous indicators of disease on their skeletons show that inflammation and periods of physical stress had been quite common. The elaborate analysis of important immune genes in the so-called human leukocyte antigen (HLA) region is summarised by Prof. Dr. Tobias Lenz, from the Max Planck Institute, as follows: "It appears that the immune response of the Niedertiefenbach people was well oriented towards recognising and fighting viral infections, unlike that of people living in Central Europe today. The data suggest that this may be due to the genetic heritage of hunter-gatherer ancestors".

This discovery is also relevant to current biomedical research, as it reveals that the modern HLA gene pool has only evolved in the last 5,000 years, i.e. after the introduction of the farming way of life and the emergence and spread of new pathogens that probably accompanied it. The scientists also found that certain variants of these immune genes, which the people of Niedertiefenbach carried very frequently, are now risk factors for chronic inflammatory diseases, such as Bechterew's disease.

"This study makes it clear: Diversity, mobility, and integration are fundamental, and millennia-old characteristics of human groups and populations," summarises Prof. Dr. Johannes Müller, speaker of the CRC 1266, concluding: "Alongside the urban and industrial revolutions, the Neolithic Period, with its agrarian revolution, is one of the crucial human eras that continues to shape our lives today – also with regard to health and disease".

The research project carried out by the CRC 1266 took place in cooperation between Kiel University and the Hesse State Heritage Office, hessenARCHÄOLOGIE, the Max Planck Institute for Evolutionary Research, and the Max Planck Institute for the Science of Human History, and was supported by the DFG Cluster of Excellence Precision Medicine in Chronic Inflammation. The research group also involved members of the Johanna Mestorf Academy (JMA) and the Kiel Evolution Center (KEC).