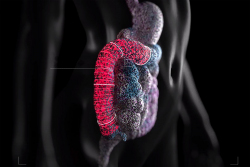 In recent years, research into the cooperation between host organisms and microorganisms in a symbiotic metaorganism has become a central topic in the life sciences. Today, scientists mostly consider fundamental life processes in the context of the symbiosis of hosts and microbes. A better understanding of their interactions therefore also plays a fundamental role for human health. Today, Monday (March 15), a new international research network in this field will be launched with the participation of Kiel University. The European cooperation project "Genomics and Metabolomics in a Host-Microbe Symbiosis Network" (SymbNET) will start its work at a virtual kick-off conference. Scientists from three European countries and five partner institutions will increase collaborative work to advance research into the symbiotic relationships of host organisms and microorganisms.

The main focus of the new network is on promoting young researchers by supporting reciprocal collaborations and establishing new types of research infrastructures. The European Union is supporting the project within the framework of the Horizon 2020 program for an initial period of three years with funding of 900,000 Euros, about 100,000 Euros of which will go to Kiel University. The consortium consists of five members and is coordinated by the Portuguese Instituto Gulbenkian de Ciência. In addition to Kiel University, the Instituto de Tecnologia Química e Biológica NOVA in Oeiras, Portugal, the European Molecular Biology Laboratory (EMBL) in Heidelberg, Germany, and the University of Lausanne in Switzerland are also involved. Kiel University contributes to the SymbNET network with its Collaborative Research Center (CRC) 1182 "Origin and Function of Metaorganisms".

Kiel University has already been strongly involved in research on the interaction of host organisms and microorganisms since 2016 with the CRC 1182, which coined the term metaorganism research for this emerging scientific field. In the new EU project SymbNET, led by Professor Luis Teixeira from the Instituto Gulbenkian, the Kiel researchers can now contribute their expertise to a network of leading research institutions across Europe. "In this international cooperation, we will facilitate the transfer of knowledge among each other, conduct research in joint projects and, in particular, promote the exchange of young scientists between the participating institutions," emphasizes Kiel University's Professor Hinrich Schulenburg, who heads Kiel's SymbNET project contribution within the framework of CRC 1182.

"In addition, the aim is to uniformly bring key technologies in host-microbe research to the highest level within the network and thus further expand the strong position of the EU in this internationally particularly competitive scientific field," Schulenburg continued. Specifically, research competencies and infrastructures in genomics and metabolomics are to be strengthened at the various locations. On the one hand, this includes technologies for analyzing the complete genomes of hosts and microbes, which can provide information about the nature of their symbiotic relationship. On the other hand, it comprises analytical methods that can decipher the multi-layered metabolic relationships between symbiotic partners. Both areas are indispensable for the identification of causal functional interactions between hosts and microbes, for example in the development of diseases.

To support young scientists, the SymbNET network offers a wide range of activities: For example, thematic courses, target group-specific mentoring and various networking activities. For the young researchers in Kiel as well as for their colleagues at the other locations, the program also includes opportunities for research stays at the European partner institutions. This will allow them to acquire valuable experiences for their careers within the framework of the project and to establish networks at an international level. In addition to regular, initially virtual project meetings of the participating young researchers, two summer schools are planned as additional highlights. For two weeks each in the summer of 2022 and 2023, the young scientists can participate in highly attractive courses in Portugal. This offer is aimed specifically at PhD students and will include lectures and seminars with some of the most renowned scientists in host-microbe research, including Professor Martin Blaser, Professor Gloria Dominguez-Bello, Professor Margret McFall-Ngai, Professor Rob Knight and CRC 1182 spokesperson Professor Thomas Bosch.