New insights into the evolution of the immune system 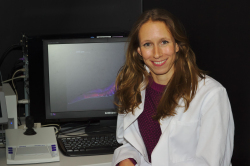 A research team from the Kiel Evolution Center (KEC) at Kiel University has now carried out a functional analysis of various representatives of the CTLD gene family in the nematode Caenorhabditis elegans. The researchers led by Dr Katja Dierking from the Evolutionary Ecology and Genetics group at the Institute of Zoology were able to show that these related genes play very different roles in the worm's immune defence. Some of the genes encode antimicrobial immune effector proteins, which are important for the defence against infections and presumably inhibit the growth of certain harmful bacteria. However, another gene has a previously unknown function: It does not play a direct role in the immune system, but instead regulates the feeding behaviour of C. elegans and thus indirectly the avoidance of pathogens. The Kiel research team recently published the new results in the scientific journal PLOS Pathogens.

One for all, all for one

The exact function of most CTLD proteins in invertebrates is not yet known. Functional studies of genes from large gene families can be challenging because related genes within a gene family often also perform similar functions. "This means that experimentally knocking out single genes from the family may not have any visible effect on the organism, because another, related gene takes over its function," explains Dr Barbara Pees, former research associate at the Institute of Zoology at Kiel University and first author of the new research paper. "For two of the studied CTLD genes, we therefore took a different approach and did not study their function on the gene, but on the protein level. We then examined the corresponding, artificially produced proteins for their antimicrobial effect. With the third studied CTLD gene, we were lucky and actually found a direct and unexpected effect on the worm after switching it off," Pees explains.

In C. elegans, the family of CTLD genes consists of 283 different members whose proteins potentially contribute to the immune function of the animal. However, experimental evidence of function is lacking in C. elegans and many other invertebrates. The research team therefore investigated how the strong diversification of the CTLD gene family affects the respective functions. To this end, the scientists examined three structurally related genes from the CTLD family as examples. The proteins encoded by them are produced in greater abundance in the event of an infection, and are thus presumably closely linked to the immune response. "Our results show that these genes play different roles in C. elegans immunity," emphasises Pees, who is currently conducting research at the University of California at Berkeley. "Two genes encode antimicrobial immune effector proteins, so they perform a specific immune function in defence against infections. However, it is interesting that one of the genes, the so-called clec-4 gene, apparently regulates the feeding behaviour of the worm - i.e. it has a significantly different function than was generally assumed," Pees continues.

Behaviour as part of the immune system?

The analysis of the Kiel scientists thus provides a new and more differentiated picture of the potential functions of the CTLD gene family in invertebrates. However, this does not mean that the apparently divergent, new function is not also linked to defence responses against pathogens. "The observation that the clec-4 gene determines the feeding behaviour of C. elegans indicates a role in immune defence in its broader sense," summarises Dierking, KEC-member and head of the research project. "The nematode feeds on bacteria. The genetic control of its feeding behaviour thus also serves to prevent bacterial infections - the worm avoids taking up harmful bacteria with its food," Dierking continues. So, although this is only an indirect effect, CTLD genes appear to regulate an innate pathogen avoidance behaviour as part of the invertebrate innate immune system. "Our findings provide insights into novel functions of CTLD proteins, which may play a role in humans as well. This contributes to our overall understanding of the evolution of the innate immune system and pathogen avoidance behaviour," Dierking concludes.

The Kiel Evolution Center (KEC) is an interactive platform at Kiel University that aims to better coordinate evolutionary researchers in Kiel and surroundings. Furthermore, under the key term of "Translational Evolutionary Research", specific bridges should be built between fundamental research and practical applications. Alongside the promotion of science, the focus of the Kiel Evolution Center also expressly includes teaching and public relations work. In addition to CAU, there are researchers involved from the Helmholtz Center for Ocean Research Kiel (GEOMAR), the Max Planck Institute for Evolutionary Biology in Plön (MPI-EB) and the Research Center Borstel (FZB), Leibniz Center for Medical and Life Sciences.